With Japan undergoing a potential nuclear meltdown and President Obama defending US intervention in Libya, there should be no shortage of news material.

Nonetheless, USA Today, America's shining example of weekday journalism, recapitulated an article from 2009 on page 3 of its front section yesterday (3/29/11).

USA Article
According to the piece, educators are using chess as a tool to teach strategy, problem-solving and social skills. It highlights a Washington state organization, First Move, which launched in 2004, and in a recent year brought chess to 50,000 students in nearly 2,000 classrooms across 27 states.

The article also cites research suggesting that student chess participants scored "significantly higher on reading tests than a control group" in a 1993 New York study. (Many other similar studies abound).

The well-known academic Dr. Alexey Root is quoted: "For some children this is a way to express their intelligence." She suggests chess is a powerful learning tool, "You see lines of force and manipulate things in your mind's eye."

And teachers, some of whom had never played chess before, "like the opportunity to build their repertoire of skills".
at 11:39 AM No comments:

Email ThisBlogThis!Share to TwitterShare to FacebookShare to Pinterest
Labels: Chess In Education

Full article from Marion, Ohio
Great quotes from the piece:

"Chess is one of those things you only get better by getting whooped... "

"It's weird. It's like a cross between science and art..."

"Deduction skills (are) necessary. There's also the artistic flair of battle, the competition, sacrifice of a piece."

"Each player starts out completely even. Chess is upsetting the equilibrium."

"Learning how to play doesn't necessarily come through winning."
at 8:41 PM 4 comments:

As some of you may know, I've included a widget on this site which offers up interesting chess articles from time to time (see the right column towards the bottom of this page). Sometimes the pieces are merely references to chess metaphors, but often they deal with the world of our favorite board game.

Tonight I noticed a fun article penned not by a chess expert or aficionado, but that beloved species: the chess mom. And for a bonus, it's an article from the city of my birth, back east. Thanks to contributor Lisa Nee, who captured a humorous slice of life at an otherwise tense scholastic tournament:

OK, I’ll fess up right now. There was a time when I did not know a pawn from a piece of pasta.

I used to think “checkmate” was how an Aussie asked for the bill.

Even so, by a strange twist of fate, I have become a chess mom.  Like soccer moms or dance moms, chess moms cart kids around to events that dominate the weekends.  Still, chess is not much of a spectator sport. In fact, at the rated tournaments parents are not allowed in the room.

The only tournament I really enjoy is the unrated State Scholastic tournament held in Hartford every year. Because it is unrated the rules are different. Competitors play only within their own grade, in one huge room. Parents line the outer margins chugging coffee, pretending to be more interested in reading the paper than their kid’s performance.

On this day a year ago, I witnessed the best-played game I believe I will ever see.

Because there are so many matches being played simultaneously there are also fewer trained monitors.  When a game is done the winner raises his or her hand and a qualified adult comes to the board and registers the result.

Chess is one of those strange games of strategy where you can win even if you haven’t. If your opponent says checkmate, it is up to you to prove you are not out of moves. If you agree you are in checkmate, game done. You lose. This is where youthful human nature can sometimes be the most powerful player in the room.

At this tournament a year ago, I was sitting at a table with a bunch of kindergarten and first grade parents. Moms and dads were coming back with stories of their daughters giving into a draw when it was not necessary, agreeing to a checkmate without investigation, and bowing to an opponent who was effectively brow beating.

So, I walked the room and saw as the ages increased, girls disappeared from the tables.  There were seven in kindergarten, and three girls in first grade, and then the rare one or two girls playing up through 12th grade.

Then, I returned to the 10th grade tables where, it seemed from the brackets, a girl with an unpronounceable name was kicking butt and drawing quite a crowd.  She had defiantly risen through the ranks by her intellect and skill, and now appeared to be applying all of her God-given assets.  There she sat in a snug sweater, with a plunging neckline, pondering moves by tapping on her pouting lips with her perfectly manicured, red-painted fingertips, casually twirling her dark locks between turns.

When she batted her eyes and whispered, “checkmate,” these adolescent boys were defenseless.

When she stood that afternoon to receive the second place trophy, with jacket zipped up and hair pulled back, she looked shy and unsure. The little girls wanted to touch the trophy. She obliged, then turned on her heel and left.

I asked my son if he knew her, he did not. But he reminded me, the most powerful player on the board is the Queen, nimble and gifted with the widest variety of moves.

Email ThisBlogThis!Share to TwitterShare to FacebookShare to Pinterest
Labels: From Elsewhere

Chess in Other Communities

Great article from an upstate New York community newspaper about a tournament they are running there.  Dunkirk, NY Observer Article

I love the explanation from the art gallery's board president as to why they were hosting a chess tournament, of all possible synergies with art:


"We want to foster the intellectual life of our community. The more practice people have thinking ahead and using strategy, the better our community will be able to plan for and create our own future."

This is the essence of why chess would be a wonderful addition to the KEYS initiative in DeKalb, but so far it's been a tough sale.

The president of the local chess club (again in Dunkirk, NY) poses some pithy ponderings upon the powers of planning in chess:


"Sometimes a plan only lasts one or two moves, and then it has to be changed.

Chess is a war game, and as General Dwight Eisenhower said, 'Planning is indispensable for battle, but when the battle begins, plans are useless.'

Without a plan, you can't hope to win, but you have to be constantly aware of the fact that every move changes the board, and be ready to adjust or abandon any plan during the heat of battle."

Battle stations, everyone!
at 7:00 AM No comments:

For perhaps the first time in history, a USCF-rated tournament was held in the 60178 zip code today.

In the upper section, Wisconsin's Awonder Liang went undefeated in four rounds. Sycamore's James Freestrom grabbed a clear second with his 2.5 out of 4 showing. In the other section, DeKalb's Nathan Kozinski went undefeated with a thrilling fourth round victory over Chris Wainscott of the dairy state. Chris wound up in a 4-way tie for 2nd through 5th with local club members John Schaeffer and Cliff Adams, and Rockford area's Steven Do (all with 3.0/4).

The sportsman of the day award goes to Guy Kittilsen who offered his sullen, position-impaired, time-challenged opponent a draw when others might have held out for the full point. And thus was avoided an ugly scene. Thanks, Guy!

Undeterred by a lost hour of sleep, two sections of competitors from far and wide battled it out upon a room full of 64-square battlefields. According to USCF records, over 69% of the entrants trekked more than 25 miles to attend, making it one of the four most-traveled to Illinois tournaments so far this year. (In fact, DeKalb's 2011 Illinois Kick-Off was also among the top four).

Thank you fearless parents and all-weather chess stalwarts for making the drive to join us. The State of Illinois needs all the tolls and gasoline taxes it can collect!

Email ThisBlogThis!Share to TwitterShare to FacebookShare to Pinterest
Labels: Results 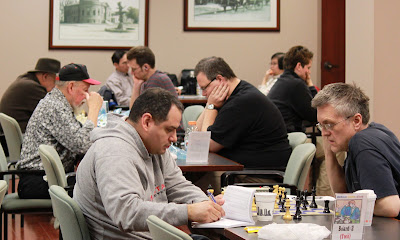 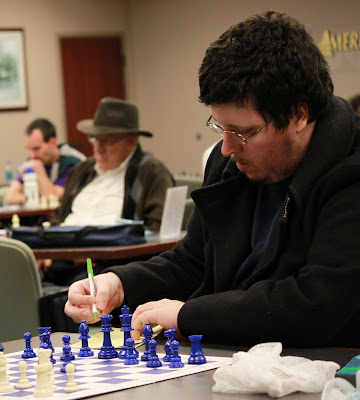 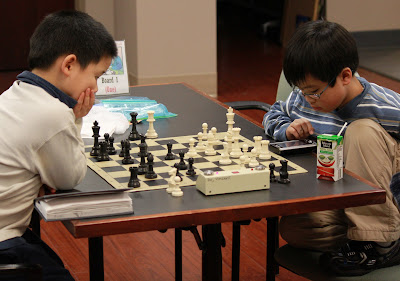 Email ThisBlogThis!Share to TwitterShare to FacebookShare to Pinterest
Labels: Photos

1) If you haven't already done so, please set all your watches, microwave ovens, VCR's (do they still make those?), motor vehicle clocks, computers, grandfather clocks, grandmother clocks, clock radios, etc. ONE HOUR AHEAD.

2) Remember we are NOT at Borders any more for tournaments. Sunday tournaments will be at American National Bank, 1985 DeKalb Avenue, Sycamore. Three story building with the eagle logo. Front lobby, take elevator one floor down.

3) Advanced Registration is at 24... (much appreciated!!!)... we only have room for 32, so if you have not already registered, show up close to 11am to assure a space. Advanced registration is now closed... no more emails accepted.

4) Castle early and always preserve your king's safety.
at 8:30 AM

Exciting Competition Signing Up for Sunday

Registrations are flowing in for Sunday, March 13's Mid-month Sunday Challenge to be held in Sycamore, IL, a knight's jump from the DeKalb border. We've hit the 20-mark which is a record advance registration for one of our tournaments. Still some spaces left, but we'll see how Saturday goes.

Competition begins at noon but don't forget: this is the first day of Daylight Savings Time!

American National Bank of DeKalb County has agreed to provide its lovely community room for the event. This should provide peace and quiet for tournament play in the wake of the Borders liquidation.

The bank is approximately 1/2 mile north of the DeKalb Borders on the northwest corner of Bethany Road and Illinois Route 23. (For out of towners, Sycamore Road of DeKalb becomes DeKalb Avenue of Sycamore as you transition over the border. Confusing, huh? Think of it as a pawn promotion of a motor vehicle -- except it's reversible!)

While the facilities will allow for more spacious playing conditions, advanced registration (no money, just an email) is highly recommended. This will allow for a greater planning of sections and should speed up things Sunday morning.

For the first time at one of our events, the DeKalb Chess Club is honored to host an international chess sensation pictured in the February Chess Life. Fresh off an astounding tournament in Greece, he's ready to take on all-comers. Due to the potential his presence might incite members of the Justin Bieber Fan Club to swarm the tournament location, we're keeping his identity a secret for now. I guarantee Mr. Bieber would lose 99 times out of 100 to this young man.
at 6:25 AM 1 comment: