A whopping 36 competitors turned out for the Lincoln Penny Challenge Sunday at American National Bank, eight scholastic players and 28 others. In an exciting 5-minute blitz play-off, Glen Gratz defeated James Marshall, but both Gratz and Marshall went undefeated in tournament play. 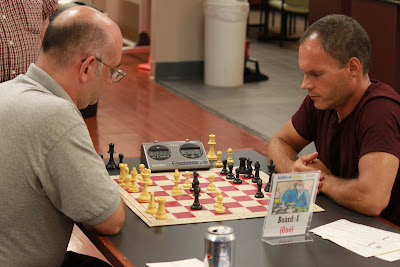 Glen, who coaches North Boone in the Rockford area, and James, who plays with the St. Charles club, split first and second place prize monies, walking away with $75 and $70 respectively.
Complete Tournament Crosstable
With 2.0/3 scores, Vincent Do, Ted Mercer and Seth Kushinsky split Class B prize money, each receiving $15 (augmented). Andrew Bell won the Class C prize ($40) and Kyle Mathews took home the Class D prize ($40).
In the 6-player Tails section, Zoran Bogdanovich, won the Class E/Unrated prize ($40) going undefeated. Zoran is pictured below going over key strategy points with his son, Nikola, who competed in the scholastic section. Playing against Zoran in the picture is Freeport's Zack Kauffman who came within one third-round game of winning the section. Keep it up, Zach (and get a haircut)! 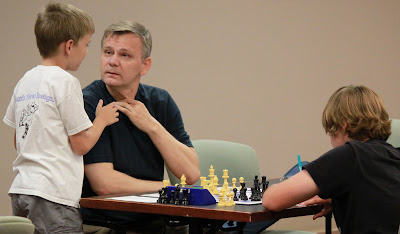 Over $300 in prize money was distributed between 8 players. Talk about emptying the penny jar!
The most rating improvement was shown by Nathan Holzmueller who went 1.5/3 against some strong players. For his efforts, Nathan's USCF rating jumped 83 points, from 1349 to 1432, raising him from Class D to Class C. Way to go, Nathan!  Keep up the good work! 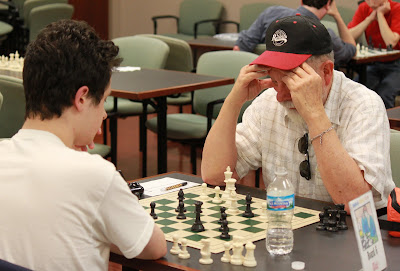 Kyle, pictured on the left above (against DeKalb club's Don Reyes), completed his provisional games sequence, and now has an official USCF rating of 1420. Mr. Mathews, who plays with the fantastic Aurora & Naperville Chess Club, achieved a 70-point bump with his strong showing Sunday. 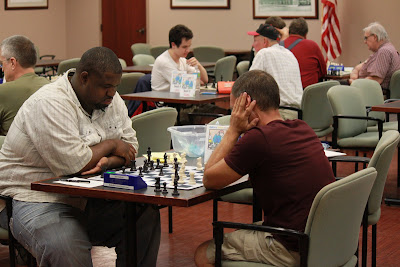 Andrew (pictured in round 3 play above) hiked his rating 48 points, while the DeKalb club's Cliff Adams enhanced his rating 46 points.
For the scholastics, there was a three-way tie with 3 points out of 4 possible. Arartik Marwah, Chufan Chen, Moulik Mehta all earned gold medals. All participants received chess books courtesy of the DeKalb Chess Club. Keep working at it, kids!
All told, this was a gratifying turn out, the most we've enjoyed for a DeKalb/Sycamore event. Perhaps the word is getting out there that this area isn't as far away as people fear... and that the ideal conditions for chess make the drive worthwhile.
As our first year of hosting tournaments comes to a close, the DeKalb Club is proud to have fielded 12 open events attracting 87 different participants from four states. This includes a couple daddy-daughter pairs, a couple father-son combinations and several sets of brothers!  A quick review of the tournament results tab shows that many different competitors have won... no consistent domination by any one player.
We'll see what Year Two brings!
at 8:07 AM